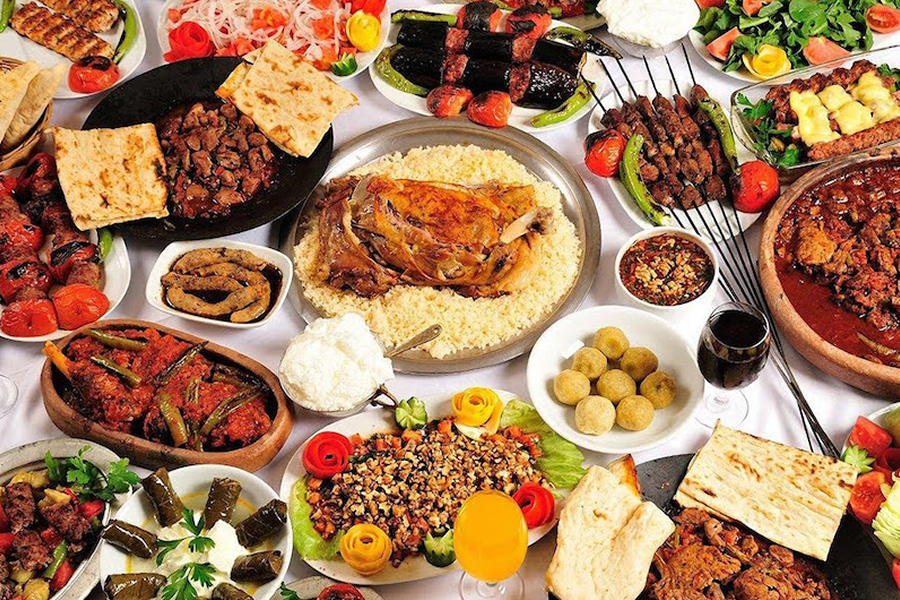 From succulent kebabs to mouthwatering meze and sweet, sticky desserts, food in North Cyprus is varied and tasty. Specialties to look out for include: seftali kebab – a type of local sausage made from lamb; hellim – halloumi cheese, traditionally made from sheep’s or goats’ milk and usually served grilled; and the delicious pilavuna.

Although the Ottoman, Middle Eastern, Catalan, French, and Italian cuisines have all affected Cypriot food, the Turkish and Greek cuisines are closely related. In Cypriot cuisine, zucchini, potatoes, peppers, okra, beans, tomatoes, chickpeas, and lentils are commonly used. It will be enjoyable to sample a variety of cuisines when visiting various destinations on your journey. We have compiled a list of some of the most popular dishes and beverages in North Cyprus.

In North Cyprus, you can buy almost any type of kebab you can get in Turkey. Popular kebabs include shish kebabs, doner kebabs, and fish kebabs. North Cyprus also has a distinct kebab style called Sheftalia (eftali) Kebab, which is only available to Cypriots.

North Cyprus has a large number of olive trees due to the moderate Mediterranean environment. In towns and bakeries, Bullas – zeytinli & Hellimli exceptional bread can be found. This bread is baked in a rock oven with olives, halloumi cheese, and wild greens. Pilavuna is produced similarly to pilavuna, but with a different sort of cheese called Talar.

This dish has Arabic origins and is commonly served in Egypt and other Arab nations. Many Africans have immigrated to Cyprus throughout history, bringing this dish with them. Cypriots believe this meal to be traditional. This green vegetable is growing and being harvested at the beginning of the summer. After being collected, the leaves are sorted and dried in the sun. You can make this dish with either lamb or chicken. Following this wonderful lunch, rice is served.

In North Cyprus cuisine, there are hundreds of distinct types of meze (such as spanish tapas), and most restaurants serve meze as an appetizer before the main dish. This is an entertaining tradition that includes alcoholic beverages and the fun of spending time with friends while eating more and more.

Wines made from Cyprus grapes are well-known, with farmers cultivating a wide range of grapes. The grapes are well-processed into Cypriot wines. You can try some of Cyprus’ finest wines while having your launch or dinner.